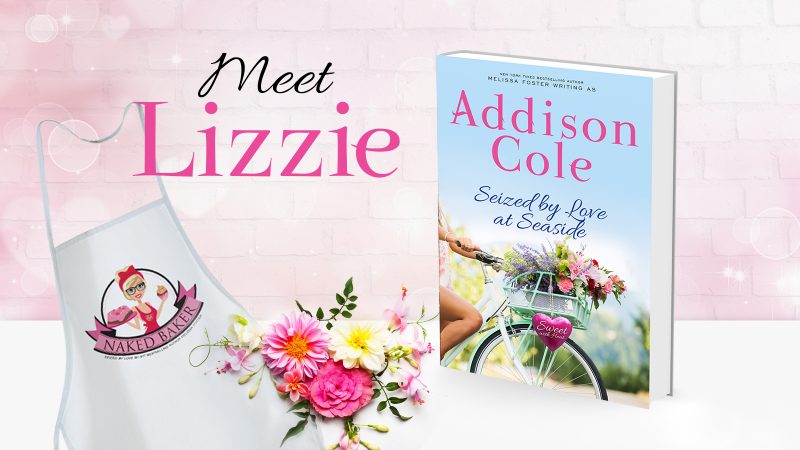 THERE WERE SOME nights when Lizzie Barber simply didn’t feel like donning an apron, black-framed glasses, and high heels, covering her shiny brunette locks with a blond wig, and prancing around nearly naked. Tonight was one of those nights. Gazing at her reflection in the mirror of her basement bathroom, Lizzie tucked the last few strands of her hair beneath the wig and forced her very best smile. Thank goodness her elfin lips naturally curled up at the edges—even when she wasn’t smiling, she looked like she was. And tonight she definitely wasn’t in the mood to smile. Her oven had been acting up for the last few nights, and she prayed to the gods of all things sugary and sweet that it would behave tonight.

Tightening the apron tie around her neck and the one around her waist, to avoid wardrobe malfunctions, and tugging on the hem of the apron to ensure her skin-colored thong and all her naughty bits were covered, she went into the studio—aka the miniscule kitchen located in the basement of her cute Cape Cod cottage—and surveyed her baking accoutrements one last time before queuing the intro music for her webcast and pasting that perfectly perky smile back in place.

“Welcome back, my hot and hunky bakers,” she purred into the camera. “Today we’re going to bake delicious angel food cupcakes with fluffy frosting that will make your mouth water.” She leaned forward, flashing the camera an eyeful of cleavage and her most seductive smile as she crooked her finger in a come-hither fashion. “And because we all know it’s what’s beneath all that delicious frosting that counts, we’re going to sprinkle a few surprises inside the thick, creamy centers.”

Lizzie had mastered making baking sound naughty while in college, when her father had taken ill and her parents had closed their inn for six months to focus on his medical care, leaving Lizzie without college tuition. Her part-time job at a florist shop hadn’t done a darn thing for her mounting school loans, and when a friend suggested she try making videos and monetizing them to earn fast cash, she drew upon her passion for baking and secretly put on a webcast called Cooking with Coeds. It turned out that scantily clad baking was a real money earner. She’d paid for her books and meal plan that way, and eventually earned enough to pay for most of her college tuition. Lizzie had two passions in life—baking and flowers, and she’d hoped to open her own floral shop after college. After graduation, Cooking with Coeds became the Naked Baker webcast, and she’d made enough money to finish paying off her school loans and open a flower shop in Provincetown, Massachusetts, just like she’d always dreamed of. She hadn’t intended to continue the Naked Baker after opening P-town Petals, but when her parents fell upon hard times again and her younger sister Maddy’s educational fund disappeared, the Naked Baker webcast became Lizzie’s contribution to Maddy’s education. Their very conservative parents would have a conniption if they knew what their proper little girl was doing behind closed doors, but what other choice did she have? Her parents ran a small bed-and-breakfast in Brewster, Massachusetts, and with her father’s health ping-ponging, they barely earned enough money to make ends meet—and affording college for a child who had come as a surprise to them seven years after Lizzie was born had proven difficult.

During the filming of each show, she reminded herself often of why she was still doing something that she felt ashamed of and kept secret. There was no way she was going to let her sweet nineteen-year-old sister fend for herself and end up doing who knew what to earn money like she did instead of focusing on her studies. Or worse, drop out of school. Madison was about as innocent as they came, and while Lizzie might once have been that innocent, her determination to succeed, and life circumstances, had beaten it out of her. Creating the webcast was the best decision she’d ever made—even if it meant putting her nonexistent social life on hold and living a secret life after dark. The blond wig and thick-framed spectacles helped to hide her online persona, or at least they seemed to. No one had ever accused her of being the Naked Baker. Then again, her assumption was that the freaky people who got off watching her prance around in an apron and heels probably rarely left their own basements.

She was proud of helping Maddy. She felt like she was taking one for the team. Going where no girl should ever have to go. Braving the wild naked baking arena for the betterment of the sister she cherished.

A while later, as Lizzie checked the cupcakes and realized that while the oven was still warm, it had turned off—her stomach sank. Hiding her worries behind another forced smile and a wink, she stuck her backside out and bent over to quickly remove the tray of cupcakes from the oven, knowing the angle of the camera would give only a side view and none of her bare butt would actually be visible. Thankfully, the oven must have just died, and the cupcakes were firm enough to frost.

A few minutes later she sprinkled the last of the coconut on the cupcakes, narrating as she went.

“Everyone wants a little something extra on top, and I’m going to give it to you good.” Giving one last wink to the camera, she said, “Until next week, this is your Naked Baker signing off for a sweet, seductive night of tantalizing tasting.”

She clicked the remote and turned off the camera. Eyeing the fresh daisies she’d brought home from her flower shop, she leaned her forearms on the counter, and with a heavy sigh, she let her head fall forward. It was after midnight, and she had to be up bright and early to open the shop. Tomorrow night she’d edit the webcast so it would be ready in time to air the following night—and she needed to get her oven fixed.

Kicking off her heels, Lizzie went upstairs, stripped out of the apron, and wrapped a thick towel around herself. A warm shower was just what she needed to wash away the film of shame left on her skin after taping the webcast. Thinking of the broken oven, she texted her friend Blue Ryder to see if he could fix it. Blue was a highly sought after craftsman who worked for the Kennedys and other prominent families around the Cape. When Lizzie’s pipe had burst under the sink in the bathroom above the first-floor kitchen while she was away at a floral convention for the weekend, Blue was only too happy to put aside time to handle the renovations. He was like that. Always making time to help others. He was still splitting his time between working on her kitchen renovations and the cottage he’d just purchased. He had work to do at his cottage tomorrow, but she hoped he could fit her in at some point.

Can you fix my oven tomorrow?

Blue texted back a few seconds later. He was as reliable as he was hot, a dangerous combination. She read his text—Is that code for something sexy?—and shook her head with a laugh.

Smirking, she replied, Only if you’re into oven grease.

Blue had asked her out many times since they’d met last year, when she’d handled the flowers for his friends’ quadruple beach wedding. Turning down his invitations wasn’t easy and had led to more sexy fantasies than she cared to admit. Her double life was crazy enough without adding a sexy, rugged man who was built like Magic Mike and had eyes that could hypnotize a blind woman, but her reasons went far deeper than that. Blue was more than eye candy. He was also a genuine friend, and he always put family and friends first, which, when added to his drop-dead good looks and gentlemanly demeanor, was enough to stop Lizzie’s brain from functioning. It would be too easy to fall hard for a caring, loyal man like Blue Ryder. And that, she couldn’t afford. Maddy was counting on her.

She read his text—Glad you finally came to your senses. When are you free?—and wondered if he thought she was being flirtatious.

Time to nip this in the bud, she thought. Her finger hovered over the screen while her mind toyed with images of Blue, six foot three, all hot, hard muscles and steel-blue eyes.

It had been way too long since she’d been with a man, and every time Blue asked her out, she was tempted, but she liked him so much as a friend, and she knew that tipping over from friendship to lovers would only draw her further in to him, making it harder to lead her double life.

That was precisely why she hightailed it out of her house on the mornings before he showed up to work on her kitchen. Leaving before he arrived was the only way she was able to keep her distance. He was that good-looking. That kind. And that enjoyable to be around. Not only didn’t she have time for a relationship, but she was pretty sure that no guy would approve of his girlfriend doing the Naked Baker show. Of course, the mornings after taping her shows, she left him a sweet treat on the counter with a note thanking him for working on her kitchen.

Even though Blue couldn’t see her as she drew back her shoulders and put on her most solemn face, she did it anyway to strengthen her resolve as she typed a text that she hoped would very gently set him straight. After work, but this is REALLY to fix my oven. The one I cook with! Thank you! See you around seven?

She set the phone down and stepped into the shower, determined not to think about his blue eyes or the way his biceps flexed every time he moved his arms. Her mind drifted to when she’d arrived home from work yesterday and found Blue bending over his toolbox, his jeans stretched tight across his hamstrings and formed to his perfect rear end. She got aroused with the thought. He’d been the man she’d conjured up in her late-night fantasies since last summer. What did it hurt? He’d never know. She may not have time to date, but a little midnight fantasy could go a long way…

Sign up for Addison's newsletter to stay up to date with new releases, events, and giveaways!